Something I’ve always longed for since I was an early teen wearing blue mascara and fake Ugg boots was to be able to buy my own house. As I’ve grown older, the hunger has only escalated and after spending a year living away from home when I was at college, it made me crave a place of my own even more. “Just imagine being able to unload the washing machine whenever you want or go crazy and have a kebab for dinner on a weekday without anyone getting pissy about it” I used to think. You can obviously tell where my priorities lie from the previous statement but in all seriousness, the thought of flying the nest just seemed unbearably exciting for me.

Fast forward a few years down the line to now and I can FINALLY say that Toby and I are the proud owners of a lovely little two bed house.

I’m fucking chuffed to say the least and relieved. So bloody relieved. Yes, buying your first property is an exciting process but in reality, it’s also draining, stressful and feels like it will never end. We’re both over the moon and buzzing to own our first property with our hard earned cash at the age of 22 but it hasn’t all been rainbows and sunshine. For starters, I think there is a severe lack of resources out there for first time buyers who don’t really know where to start with the whole process. Despite having filled out a Help To Buy application in 2017 which was quickly approved, I’m pretty sure I spent from then up until September just kind of floating around looking at properties online but not really knowing how to get the ball rolling. Spending my weekends looking at new builds going up in the area became laborious and I didn’t have an expert on hand to explain the details to me. As we went for shared ownership, everything became a little bit more difficult as it’s a fairly new scheme and you’d be surprised at the number of estate agents who haven’t got a scooby about it. 9/10 were absolutely useless but I won’t waffle on about that too much because I’ll probably talk about shared ownership in more detail in another post. I’m sure if you were just outright buying a property, renting or going down the Help To Buy route rather than the Share To Buy route then it would be much easier!

We are so fortunate that both our parents were on hand to help throughout the whole process because we couldn’t have done it without them. From explaining what MOS meant to raising questions we hadn’t even thought of, they were essentially our search engine. We also found the mortgage advisor we dealt with initially at Nationwide really helpful. He secured our decision in principle back in October and gave us the most invaluable advice and sort of guided us through the first part of the journey. Big up to Michal at Tunbridge Wells!

Looking back, I think getting the decision in principle was the easiest part of the whole thing. It’s essentially just letting them know how much you earn and how much you spend. Hardly rocket science! The next step was viewing some properties which was pretty simple and so exciting! Trust me, when you’ve spent months looking online, it makes it feel so much more real when you actually get to step foot inside an actual house! My anxiety did creep up on me a little bit before we viewed the first property but I think that’s just because I was so worried about not having the right paperwork and questions to ask! Note: Make sure you write down anything and everything you need to ask your estate agent on your phone so you don’t forget!

I think I speak on behalf of Toby when I say that the most stressful part of this whole thing was the week where we needed to find and confirm a solicitor, mortgage advisor and mortgage lender. FML. Stressful is not even the word! Fortunately, Toby’s fairly flexible with his work schedule so he had the time to take most of the phone calls but it was still a pretty intense week for the both of us. All our free time was consumed with calling companies for quotes, comparing costs and interest rates, trying to get hold of payslips, P60s and bank statements (which is a real life nightmare if you’re with Nationwide, just saying), the list goes on. I even had to cancel a work party just so I had the time to fill out forms, scan documents and basically get my shit together before the deadline. Thankfully we were given five days instead of three, which it was originally supposed to be, otherwise I have no idea how we would’ve been able to choose who we wanted to go with AND be able to send across all our info. Even though this week felt like living hell, it’s not to say we didn’t get those giddy moments once we’d signed a form or clicked ‘upload’ on the mortgage portal because we definitely did! We just thought it was important not to get too ahead of ourselves when there was still so much potentially for stuff to get declined or go wrong because unfortunately that does happen sometimes.

Once we had got that mental week out of the way, things seemed to calm down and we were sort of in limbo for a bit. We were waiting for a valuation to take place on the house so the mortgage could be accepted but nothing was confirmed so it was a bit of an odd period of time. It’s just so hard to not get ahead of yourself and rush out and buy all the furniture and pots and pans in the world (especially when it’s Black Friday which made things 10 times harder). I know that’s what some people do from the moment they view a property but we just didn’t want to rush things when there was so much which could’ve gone tits up.

After a couple of weeks of waiting and very little communication with our mortgage advisor, we received an email to confirm that we had got our mortgage! After that, it was all systems go to ensure our solicitors were carrying out the searches so we could exchange. Despite being told several times we’d be able to exchange before Christmas, things just weren’t progressing as quickly as we had hoped. It was during this period that we felt let down by our solicitors who weren’t very proactive and useless with replying to emails or calling us back and it became extremely frustrating. We were constantly getting pissed off but then having to remind ourselves that being angry wouldn’t get us anywhere and it became quite tiring. 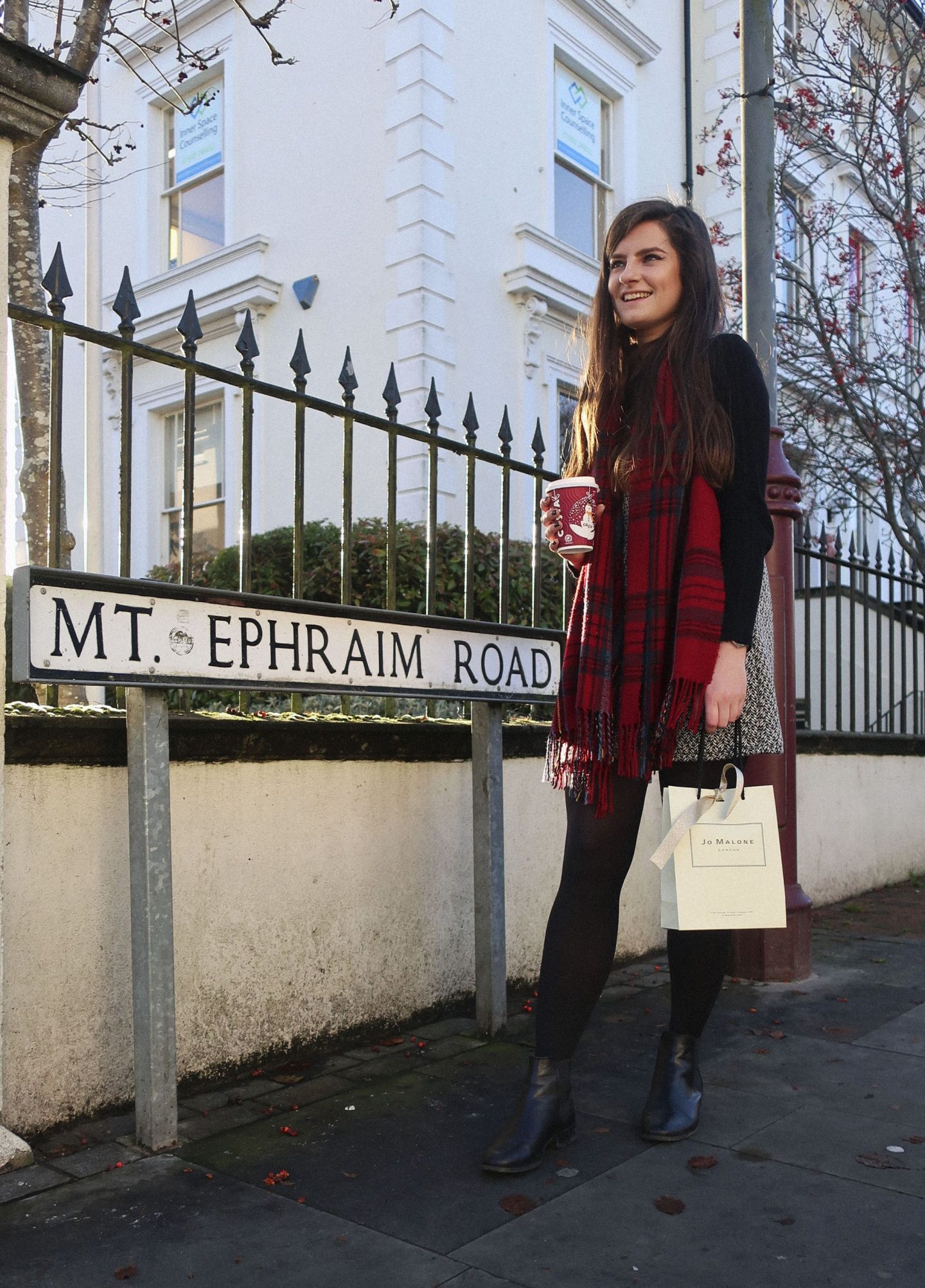 Eventually we received our reports and our exchange and completion dates were announced for the third week of January. I don’t know why but it came as a bit of a shock as I was sort of expecting for the admin stage of the process to go on forever and never to actually move in. So this all happened on the second week of January which basically meant we had seven days to sort our shit out. I always used to think that the whole packing up your bedroom thing would be so exciting but in reality, it was bloody long and bloody boring. I had a good old clear out though and before I knew it, my life was separated into a variety of cardboard boxes.

That last week also included a lot of decision making which is something Toby and I found ourselves bickering over. It was tough as we never argue so to go from that to then getting in a huff at each other over whether we were going to have blinds or curtains wasn’t ideal. But by the time moving day came around, we were overwhelmed with excitement and forgot all about the disputes we’d had.

One of the major problems we faced was that we had quite a big snagging list which the estate agents and housing association had to correct. Some items they refused to fix which was infuriating to say the least and others they still haven’t sorted even though we moved in a week ago! Unfortunately, you just have to deal with the frustration and look at the bigger picture that a broken bath panel or a wonky cupboard door isn’t a major issue! And by the time our completion date came around, we just wanted to get in there!

So we had our final ‘viewing’ around the property, recorded the meter readings (as you can imagine, I had no clue what the fuck I was doing) and checked that we were happy with the snags that had been fixed. Then all it took was a quick phone call to the solicitors to check the money had gone through and voila… We officially owned our house! Then we had a whole weekend of moving stuff in and out, rearranging furniture and making a world recording breaking amount of tea and coffee! But the relief to finally be in there is indescribable and we’re both so chuffed (and exhausted)!

To summarise, this whole process has been the following (in no particular order): exciting, stressful, frustrating, tense, hectic, exhausting and confusing.

Congratulations if you’ve made your way to the end because you deserve a medal, a bottle of wine and a large bar of chocolate for your commitment. Unfortunately, I can’t offer you any of the above so I’ll say thank you and I hope this has helped anyone who’s a first time buyer and looking to jump on the property ladder. I don’t want it to seem really negative but I just feel like this is the blog post I needed to read back at the beginning of this process to keep me level headed and give me realistic expectations because it’s not a walk in the park by any means! I’m 99% sure I’ve missed out some important details in this blog post but there will be plenty more content coming soon.

I’m not an expert ~ obvy ~ but if you wanna ask me any questions about my experience or advice or anything like that then just let me know!

If you’ve bought your own house, how did you find the process? Do you want to see anymore moving out related posts from me? Are you currently a first time buyer?